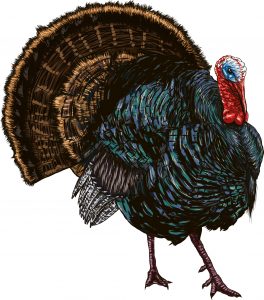 For the Love of Wild Turkey Spurs

It’s one of the first things we study on a wild turkey gobbler when we give thanks and reflect on the many powerful feelings we have after killing one.

Often, as that bird struts toward us, wheels and turns, we catch a first glimpse of leg spurs on the bird.

Wild turkey spurs are expected and common on male wild turkeys, though some atypical specimens are occasionally spurless. We often age a gobbler by spur length: an inch-long at two years, and less for a young gobbler. Slowly, surely the spur develops into what we turkey hunters might call “hooks” as the bird grows older.

“Limbhanger” status is achieved when you can hang a gobbler securely on a tree limb.

Yes, some spurs break off, are rubbed down on rocky terrain, stunted and shorter than the rule. That’s the beauty of studying wild turkey spurs. All are different.

Some are black, some gray, while others can be pinkish, even pearlescent and tipped with dark tones.

But measuring the length of spurs is what really gets some turkey hunters going.

How to Measure Spurs

To measure each spur correctly, either for personal reasons to submit it to the record books, tape the length along the outside of each spur.

Do this from where each spur emerges on the scaly leg to the spur tip.

Old-school turkey hunters sometimes create a hat band made of spurs, or even a necklace bearing each sharp spur.

You still see a bit of this at the NWTF Convention every year, and it’s great to strike up a conversation about the spurs, the hunts that brought the bird to hand and so forth.

This has always reminded me of a waterfowler wearing leg bands on a lanyard.

Some of us create shadow boxes to hold spurs and the hunt memories, or simply stand them in a fixed position, with weight applied, so they dry in place.

Like antlers on the wall, they often bring back a flood of thoughts and feelings.

Spurred legs in plastic storage boxes can also save your many trophy parts for a look when the mood strikes, as it so often does in the off-season.

I’ve seen photos of double-spurred gobblers, and have even had a friend or two kill a gobbler with pairs on each tarsus.

I’ve been in a turkey camp or two where a gobbler had none. And sometimes a bird will have one long spur and one a bit shorter.

Young spring gobblers, a.k.a. jakes, can have small pimple spurs (late hatch last year) or some measuring a half-inch or so, but under an inch (early hatch last year; or a late hatch the year before, geography depending). Fall jakes, roughly 18-months-old, also have spurs shy of an inch, but surely worthy of a second look or two.

Hens also have a small, barely discernable pimple on each leg if you look real close. To call it a spur would be exaggerating.

In the end, spurs are yet another distinguishing characteristic of the wild turkey, a game bird many of us truly love to hunt. All spurs are cool.

Don’t forget to check out realtreebeauty for some great fragrances this fall!